The Simple Fertilizer Trial on Cultivators field initiated during 1952-53 has gone through changes over time as per need and contributed significantly for the green revolution of the country by developing and demonstrating the usefulness of fertilizers in the farmers field as Experiment on Cultivators Field (ECF). This has resulted in suitable fertilizer policy development by the Government of India for improving the productivity of major production systems such as rice-wheat, rice-rice and maize-wheat systems which meets around 72 % of Indian calories requirement.

The scheme has developed component production technologies for the emerging cropping systems at the state and national level in the form of All India Coordinated Agronomic Experiments Scheme during 1968-69. The cropping systems research carried out from 1989 to 2010 resulted in a significant contribution in increasing the cropping intensity of the country by 25 % (current cropping intensity of India is 142 %) since independence. Long term nutrient management strategies identified for cereal-cereal cropping systems have helped to sustain the productivity of rice-wheat and rice-rice systems. The other production practices developed such as tillage and planting methods, site specific nutrient management, sustainable production model etc by the institute over the years have also contributed for improving the productivity of crops and cropping systems besides improving input use efficiency. Documentation of nutrient response of crops and cropping systems in 96 districts of the country helped to estimate the production potential based on balanced nutrient application. During the period (2010-20), ICAR-IIFSR and its sub schemes namely AICRP on Integrated Farming Systems (74 centres of main, sub, ICAR institute based on-station and on-farm centres in 25 States) and All India Network Programme on Organic Farming (20 centres in 16 States have developed 51 IFS and Integrated Organic Farming System (IOFS) models and organic farming packages for 51 cropping systems which give scope for doubling farmers income by March 2022 besides meeting the household level nutrition requirement of human, livestock, and soil. The 63-farmer participatory refinement of farming systems and also documentation of 81 success stories of farmers have resulted in effective dissemination of component technologies of cropping and farming systems through various sources. The IFS models developed are found to be emission negative or low GHG emitters paving the way for the promotion of climate-resilient farming in India.The Indian agriculture is challenged by several projected scenarios of change in climate, consumption pattern, reduction in resources especially land, labor, capital and water, enhanced consumerism for quality products due to economic improvement, urbanization, increase in absentee farming etc which needs to be addressed in a holistic manner. Further strengthening of the three research themes such as integrated farming systems, cropping systems, and organic farming on which the institute and its partners are working is very much needed to address the issues in present and futuristic perspective. Measuring the ecosystem services from IFS, IOFS models, upscaling of developed models, typology based targeted interventions, demonstration of business modules of IFS in a farmers field, evaluation of natural farming practices, capacity building and human resource development in the field of IFS and organic farming needs to be undertaken and further strengthened for meeting the objectives of Sustainable Development Goals (SDGs). 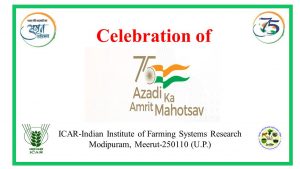